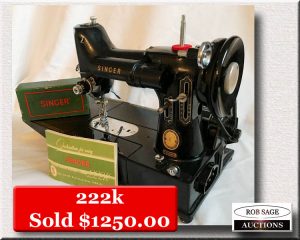 “The SINGER® 222K model looks very similar, and is often mistaken for, the SINGER® 221 model. There are several important distinctions between the two models. The 222K had a very limited production run from 1953 until 1961. The 222K has a removable bed which turns it into a free arm sewing machine and the feed dogs can be dropped. The 222K model is also a smidge taller than the 221 model. SINGER® 222K models were produced in black only and are highly desirable – and expensive, due to their features and limited production run.”

So they are hard to find, and worth many times more than the 221.

We sold one in the March auction, and prior to that, I had sold only one other 222k in 22 years in the auction business. 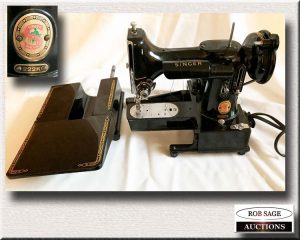 Less than a week after the March auction, I am going through an estate, pulling out the items we will be selling in our April 7 country antique auction.  I looked through a pile of items in a closet, and spotted the familiar black case, the Singer featherlight machines come in.  First thought, “good, another featherlight sewing machine”.  Pulled it out of the case, and couldn’t believe it when I saw it was actually another rare 222K!

What are the odds, I would end up selling two of these machines a month apart?

Some might wonder how rare are these machines, if he ends up with two of them in such a short period of time?  Are they now coming out of the woodwork because they are selling for good money?

The answer is …the machines are still rare, it was just a fluke that two of them came up so close together.

The family was not aware of the value, in fact they stuck it in the closet, thinking I wouldn’t be interested in putting it through the auction. It was just “granny’s old sewing machine”.

This often happens in this business.  You go months without a certain type of item, and then end up with two or three of them in the same auction!

I don’t have control over what comes my way. If several similar items come up, I sometimes suggest to consignors that they wait for the next auction or two, until I sell the other similar items.

However, in this case, when I picked up the first 222k, I had no idea there was another one waiting for me!

And once again…that’s what keeps this business so interesting!